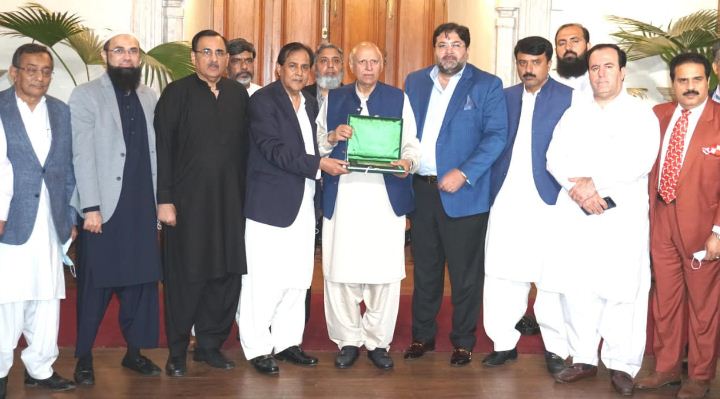 Karachi (DNA): Mian Nasser Hyatt Maggo, President FPCCI, has thanked Chaudhry Mohammad Sarwar, Governor Punjab, for hosting a high-profile delegation of FPCCI with an open-heart and realization of the business, industrial, and trade community’s role in economic development of the country.

Mian Nasser Hyatt Maggo took this opportunity to highlight some glaring anomalies in the Federal Budget 2021-22. He said that all emphasis is on extracting more taxes from existing taxpayers; rather than broadening the tax base as advised by FPCCI in its Budget Proposals.

Mian Nasser Hyatt Maggo vehemently criticized the imposition of Section 203A, which authorizes assistant commissioners to arrest a businessman merely on the basis of a doubt of tax evasion. He maintained that business community will never agree to such barbaric and anti-business piece of legislation – which also happens to be against basic human rights.

Chaudhry Sarwar assured the delegation of raising their concerns and issues with the Federal Budget 2021-22 in order to help them have resolutions amicably and swiftly with the federal government. He also appreciated the role the business community plays as the backbone of the economy through generation of taxes and employment.

FPCCI is looking forward to have anomalies in the Federal Budget 2021-22 addressed in the larger national interest and economic growth of the country through dialogue. These anomalies are detrimental to the businessman’s confidence and investment environment of the country.=DNA