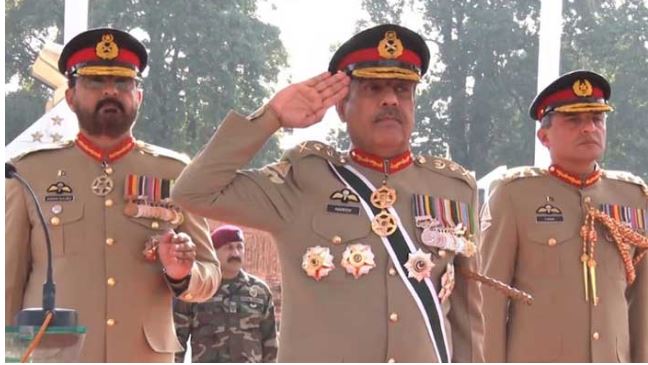 According to the military’s media wing, General Nadeem Raza is retiring on November 26 after 41 years of illustrious military service. The farewell ceremony was attended by former CJCSC’s and senior officers of the tri-services.

In the farewell address, General Raza thanked Allah Almighty for enabling him to discharge his duties to the best of his abilities with honesty, justice and dignity.

He applauded the sacrifices rendered by the armed forces in defending the motherland, said the ISPR.

The outgoing CJCSC reiterated that defence of the country is impregnable and gallant soldiers will not hesitate in making it even more formidable.

A smartly turned out tri-services contingent presented guard of honour to the chairman joint chiefs of staff committee on arrival at the venue.

Gen Sahir Shamshad Mirza will take over from Gen Raza after his appointment.

A day earlier, uncertainty surrounding key appointments in the military ended after President Arif Alvi signed the summary and approved the appointment of General Asim Munir as the next chief of army staff and Gen Sahir Shamshad Mirza as chairman of the joint chiefs of staff committee (CJCSC).

It added that the promotions and appointments have been made under article 243(4) (a) and (b) and Article 48(1) of the Constitution of the Pakistan. Both the articles are to be read with Sections 8-A and 8-D of the Pakistan Army Act 1952.

In this regard, the President has signed the summary received in his office.

Both — Gen Munir and General Mirza — met PM Shehbaz Sharif and President Arif Alvi, separately, after the confirmation of their appointment as the new chief of army staff and joint chief of staff committee.