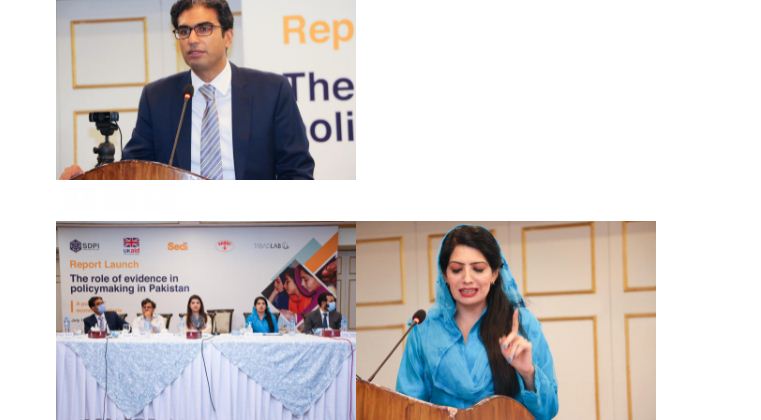 She was sharing her views with the participants at awebinar and report launch on ‘The role of evidence in policy making in Pakistan’ organized by Sustainable Development Policy Institute (SDPI) here on Thursday. Ms Malik said the government is planning to reform economic development and various key sectors of the economy.

“We are cognizant of centrality of evidence in policy makingin Trade and Commerce and hence,consider consultations a fundamental tool for devising policies,” she said. The findings of SDPI’s report will help in a big way to the Ministry of Commerce as well as the Ministry of Textile and my fellow parliamentarians while undertaking policies in respective areas, she concluded.

Former Chairman, Board of Investment, Mr Haroon Sharif, highlighted that lack of data and trust among the stakeholdersare common phenomenon in Asian countries. He explained thata policy should not be just a wish list but an outcome-based act. Therefore, we need to have a reflexive and all comprehensive approach towards the policy formulation and policy implementation. He said the strategic evidence is vitalat macro-economic level and specialized zones for bringing in investments. The current structure of state needs to strategize research house and eliminate less productive research mechanisms.

Dr Vaqar Ahmed, Joint Executive Director, SDPI, while sharing excerpts from the report, said that policy is seen as a subject of whole of the government. He saidamidst pandemic, Pakistan has come up with better macro-economic indicators which is good news. He said that the evidence-based data is most important, and the trade regime has to work with international agreement. He said that enabling and correct use of data is important in mapping trade negotiations. Besides,evidence-based data also helps in enabling women led and new start up business and their relationship with the Ministry of Commerce.

MsRadhika Menon, from Oxford Policy Management,opined that political investment and international donors could play a vital role in a sustainable policy making. She said evidence generation and institutionalization of data for identification of gaps for gender inequality and social protection should also be a key area of focus.

Umar Nadeem, Head of Delivery Tabadlab, was of the view that imparting skills to youth always prove productive in terms of outcome in formal and traditional education. Therefore, the TVET component should be much more holistic and comprehension at ecosystem level.

Amjad Nazeer, Director Institute of Development Research and Corresponding Capabilities (IDRAC),said about 12 to 13 million childrenin in Pakistan are engaged in child labor according to a national survey. Therefore, effective policy making based on evidence and correct data is important to curb such prevalent practices in different sectors of economy. Research Fellow, SPDI,Dr Fareeha Armaghan opined that a smart and evidence-based design is required to make a workable policy.