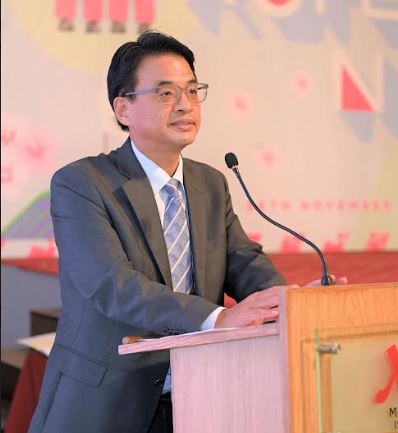 ISLAMABAD, NOV 29 /DNA/ – The Embassy of Korea in Islamabad organized the Korean Night at the residence of the Ambassador of the Republic of Korea Suh Sangpyoon the 25th of November, 2021. This event was held to celebrate Korean culture, art and its music under the theme of the Squid Game.

The event was attended by more than 300 high-level dignitaries including Minister MNFSR Syed Fakhar Imam, the Heads of embassies and International organizations, and Pakistani officials, artists and businessmen. The students of National University of Modern Languages NUML volunteered at the event as the Monitors in the Red suits, while embassy staff dressed in the 456 Protagonist uniforms projected the Squid game themed event.

The event is a testament to the growing interest in Korean arts and culture among Pakistanis and the world. The Ambassador commented that events like this reaffirm the cultural exchanges are the most effective ways to make different people friendly. The Ambassador wished that this event could be a building block towards more solid cultural ties between Korea and Pakistan.

TheKorean Night opened with the Squid Games seriesopening video which is Netflix’s most-watched series as of November 2021. The participants both young and old participated in the traditional Korean games including Red Light, Green Light (MugunghwaKkochiPieotSeumnida: ‘Mugunghwa Korean National flower has bloomed’), Dalgon and Ddakji. Mugunghwa was the first game whereby players competed to reach the Young-hee character and going beyond the finish line while staying undetected.

The Korean Embassy Chef Lee demonstrated the Dalgona Candy making process on stage and then the guests volunteered to play the second Dalgona challenge in pursuit of prizes. Ddakji/Ttakji was the last challenge where contestants competed with the card-board tiles and flipped the opponent tile to win the game. There was a K-Pop dance performance by Sophia Mujahid and the program ended with a musical duo ‘Jinspark’ performing with their traditional Gayageum and modern Handpan serenading the audience.