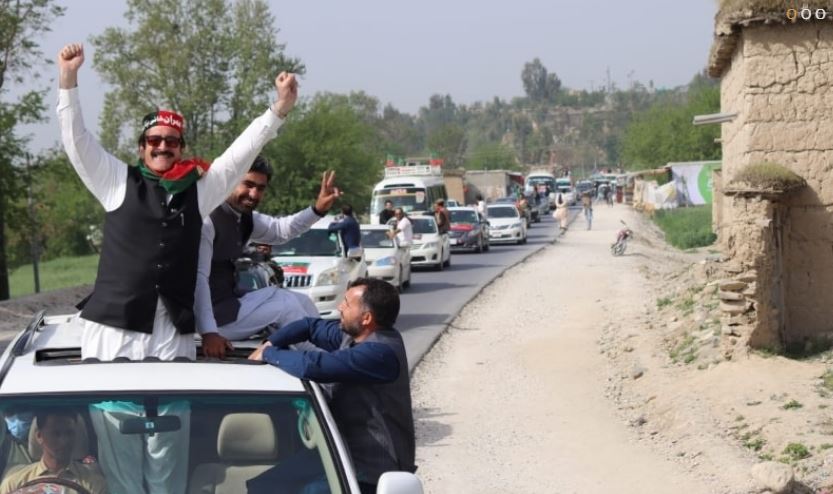 Islamabad is all set to host the rally amid mounting political tensions days before the National Assembly goes to vote on the no-confidence resolution submitted by the opposition against Prime Minister Imran Khan.

Workers and leaders of PTI begun descending in the capital as the party prepared to make its Amr Bil Maroof (enjoin the good) public meeting a bigger success than tit-for-tat rallies being led by opposition parties.

In an audio message released on Twitter early on Sunday, PM Imran said that today’s rally was not just PTI’s war but belonged to the entire nation. “This is a battle for the future of Pakistan.”

The premier urged supporters to reach the venue early as there were fears of blockades. “I’m scared you may not be able to reach on time because of this.

“God willing, we will make history in Pakistan today,” he added.

Meanwhile, federal Information Minister Fawad Chaudhary said that a “brave nation needed a brave leader”, adding that PM Imran would never let the nation bow down. In a video message, he urged citizens to attend the “historic rally”.

Islamabad police also provided directions for participants making their way to the venue. The Islamabad deputy commissioner added that all roads were open in Islamabad while entry and exit points were clear.

“Only Srinagar Highway is closed at H-9 area but alternate routes are open,” he said.

Social media was abuzz in anticipation of the prime minister’s rally, with supporters sharing images and videos of them making their way to Islamabad.

A PTI Sindh caravan, led by Opposition Leader in the Sindh Assembly Haleem Adil Sheikh, had reached Islamabad on Saturday. The caravan had started its journey from Karachi on Friday. Additionally, the party said that a train — carrying supporters from Karachi — had reached Lahore on Sunday morning. Education Minister Shafqat Mahmood, too, led a “large rally” from Lahore, which is on its way to the capital.

“Other PTI caravans are on their way from across the country to participate in the historic public meeting,” PTI Senator Faisal Javed said.

PTI added that caravans — being led by federal ministers and local PTI leaders — from Waziristan, Khyber Pakhtunkhwa, and Gilgit-Baltistan had also left for the rally.

The information minister said that Pakistan’s media fraternity and more than 43 representatives from international media organisaitions had gathered at Parade Ground to cover the rally.

He directed PTI workers to facilitate media workers, saying: “The world will see this historic rally through the eye of the media.”

On Saturday, a PTI spokesperson announced that the media professionals would not be allowed to use professional cameras to record the event as “cameras pose security risk”.

This led to organisers and media crew exchanging arguments after the latter were told that cameras belonging to private TV channels would not be allowed due to the “security protocol” of the prime minister but they would be allowed to use their mobile phones for footage and photos.

Separately, Interior Minister Sheikh Rashid warned the JUI-F against creating unrest in the capital. He also told the opposition that PM Imran would “play until the last ball and the last over”.

Speaking to the media in Islamabad, the minister said that the PML-N had been given permission for staging a rally on March 28 (tomorrow), predicting that voting on the no-trust move would be conducted by April 4.

Rashid also informed the nation that the interior ministry’s command and control centre was operational round the clock, adding that he was personally monitoring it. He stated that any incident could be reported on 0519206660 and 0519218594.

“All of Islamabad is open. Don’t go off of rumours.”

He also revealed that the prime minister wished to address the rally around 5pm, despite the large number of people that were still en route to the capital. “Even though the political committee said to delay [the speech], he wants to do it earlier during the day time,” he said, urging citizens to make haste in reaching Parade Ground.

In case there are obstacles, we have approximately 15,000 security personnel to maintain law and order, he said.

Addressing the JUI-F protesters, the minister said that the Islamabad High Court chief justice had issued directives for keeping Srinagar Highway open. “If you come and resort to violence, then the law will be enforced according to the chief justice’s orders whatever the result may be.”

He said that the party had a right to stage a rally, but warned that the capital administration would take action against them if they resorted to violence.

“I want to say this to JUI-F specifically: Srinagar Highway should be kept open. Stay within your area. The time allotted to you is up. The PML-N has asked for this place on March 28 […]. If your aim is to spread chaos or stop the people travelling for Imran Khan’s rally, that won’t happen. We are sitting right here.”

The minister also predicted that the opposition would be left empty-handed. “Whatever the result, I have inside information, you will get nothing and Imran Khan will prevail.”

Workers and leaders of the JUI-F, under the banner of the opposition alliance Pakistan Democratic Movement (PDM), had already come to take the stage on the Srinagar Highway while PML-N leader Maryam Nawaz, along with Punjab opposition leader Hamza Shehbaz was leading her party caravan via GT Road to the capital, calling it the last nail in the coffin of the PTI government.

The PML-N said the PDM’s long march could stay in the capital for two or more days depending on the political situation despite the interior minister’s warning that the opposition would not be permitted to extend its stay.

The Islamabad High Court on Saturday warned the JUI-F against violating conditions of the no-objection certificate for holding a public gathering under the PDM banner and directed the capital administration to act against violators in accordance with the law.

The organisers of the JUI-F public gathering assured the capital administration that they would follow the terms and conditions of the NOC in letter and spirit.