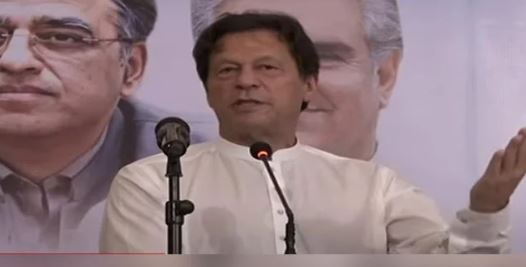 ISLAMABAD, JUN 13 (DNA) — Pakistan Tehreek e Insaf (PTI) Chairman and former premier Imran Khan on Monday claimed the country would face the issues of food insecurity if the farmer’s situations would be ignored.

Imran Khan lambasted the government and went on to say the price of power and petrol has witnessed whooping hike, adding that the ‘imported government’ before coming to the power used to say that inflation is sky rocketing , but now within the two months  of its tenure, the country witnessed ballooning inflation.

The former premier went on to say that despite being an ally of the United States, India has purchasing oil from Russia, adding that these people (coalition-government) has come to the power to get rid of their cases.

Imran told that Kissan Convention that the ‘imported government’ is allegedly obeying orders from Washington. He hoped that fresh elections will be announced in the country soon as it is the only solution to the current turmoil.

Highlighting the achievements of his government in agriculture field, Khan said the sector was prospering at a 4.5pc growth rate during PTI government and added farmers were given market-compatible rates for their crops.

The country’s security will be endangered if the agriculture sector does not improve, Imran Khan said and added that the Russia-Ukraine war created a wheat shortage as the supply change is distributed badly.

He recalled that the price of urea was Rs1700 per sack in the PTI government which now has reached Rs2800 per bag. The rapid increase in production cost has also created problems for the farmers.

Turning his canons to the PML-N-led government, the inflation is increasing with every passing day in the tenure of the present government. The recent fuel, electricity and gas hike has broken the backbone of the masses of the country. =DNA