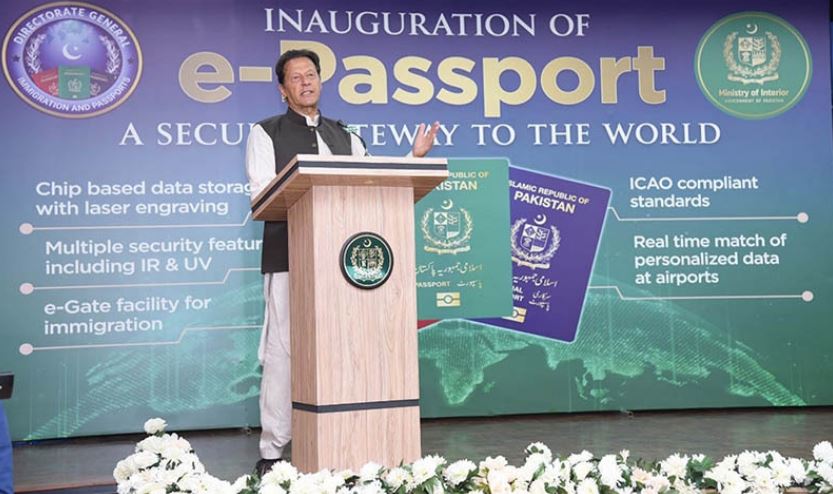 ISLAMABAD, MAR 30: The contents of a “letter” that Prime Minister Imran Khan brandished at the PTI’s power show on March 27 and which purportedly contains “evidence” of a foreign conspiracy against his government were shared with some senior journalists on Wednesday.

Arshad Sharif, Kashif Abbasi and Imran Riaz Khan were among the journalists in front of whom the contents of the letter were read out.

Talking to ARY News, Sharif said: “Asad Umar shared some details. They showed the letter from a distance. It is very clearly evident [from the letter] that whatever is happening in Pakistan through the no-confidence motion was conveyed on March 7 and [whoever the letter was addressed to] was told that if the vote of no-confidence is successful, Pakistan’s problems internationally will be reduced but if Prime Minister Imran Khan survives the no-confidence vote, arm-twisting of Pakistan will be done.

“Very clear threats have been given and the government discussed these in the federal cabinet meeting today.”

“My information is that when the details of this letter were being read out in the federal cabinet meeting, five to six ministers became tearful. PM has neither told the name of the country nor the officials. He confirmed that these things have been shared with the army chief and the DG ISI. He also said an in-camera session of parliament will be briefed by Shah Mahmood Qureshi about this. The parliament will also be taken into confidence.”

Imran Riaz Khan, while talking to Samaa News. corroborated Sharif’s account of the briefing, saying: “Only the content was revealed as the copy of the letter cannot be given. They have also shown it in the cabinet meeting. It is present with the military leadership. Today, all the details were shared with the media through an official in different languages.

“What they shared with us is that this letter is a conversation between Pakistani officials and officials of another country. According to my understanding, that country is America but the government did not name the country. They did not tell the number of officials or the location of the meeting. They said that Europe and the US are not happy with Pakistan’s stance on Russia and Ukraine.”

Meanwhile, Kashif Abbasi, who also participated in the meeting, told ARY News that only the gist of the letter was shared with the media persons. According to him, it was clearly stated in the letter that the country concerned was “unhappy” with Pakistan’s policies.

“The Russia tour was clearly mentioned and it was said that it (the visit) was the prime minister’s individual decision,” he said, adding that the letter stated that if the no-confidence vote succeeds, “we will forgive everything, otherwise, the days ahead will become difficult”.

“The mention of the prime minister and the no-confidence motion was made more than once and regime change was talked about. We were given details and shown [the letter] from a distance but we were told it could not be shared because of the Official Secrets Act,” he added.

Earlier in the day, Prime Minister Imran Khan announced that he would show the letter to senior journalists and the government’s allies.

He made the revelation while addressing a ceremony for the launch of the e-passport facility in Islamabad.

The development came hours after it became apparent that the MQM-P had decided to side with the joint opposition in the no-trust motion against the prime minister, which would translate into the PTI government losing its majority in the National Assembly.

In the PTI’s public meeting in Islamabad on Sunday, the premier had pulled out a piece of paper from his pocket and waved it at the crowd, claiming it was evidence of an “international conspiracy” being hatched to topple his government.

“Foreign funding is being used to change the government. Money is coming from abroad and people inside the country are being used. Some of them are unaware they are being used and some are intentionally using this money against us,” he had alleged.

During today’s ceremony, the prime minister touched upon the current political crisis in the country, stating that this was “nothing new” in a parliamentary democracy.

“People lose confidence in their party,” he said, adding that a no-confidence motion was a “democratic” move.

“But this is a foreign imported conspiracy and it started when people from abroad started controlling Pakistan through telephone calls. They cannot tolerate a leadership that works in the people’s interest.”

Reiterating his criticism of America’s ‘war on terror’, he said that Pakistan had paid a heavy price for its participation. He said that many were unaware of the exact scale of the suffering of those living in the country’s tribal areas.

“We sacrificed our interests for those abroad but they never valued it,” he said.

The premier said he would show the letter containing evidence of a foreign conspiracy against the government to senior journalists and allies.

“The document that I have, I will show it to senior journalists today. We want to protect the nation and can’t divulge the details in public. People think this is a joke and I have decided to share it with top journalists.”

He added that he would also call one member from each allied party to show them the “document and prove that it is real”.

“People can take whatever decision they want to. But beware of the fact that, directly or indirectly, you may become a part of a huge international conspiracy,” he said, adding that the document would provide proof of the same.

Separately, the prime minister postponed his address to the nation.

Earlier in the day, Interior Minister Sheikh Rashid Ahmed said the prime minister would address the nation in the evening.

Speaking to the media before a meeting of the federal cabinet, the minister said that an emergency meeting had been called. He asserted that PM Imran would “fight till the last ball”.

“Voting on the no-confidence motion is on April 3 and the PM will address the nation in the evening,” he said.

However, Senator Faisal Javed Khan later shared on Twitter that the address had been postponed.