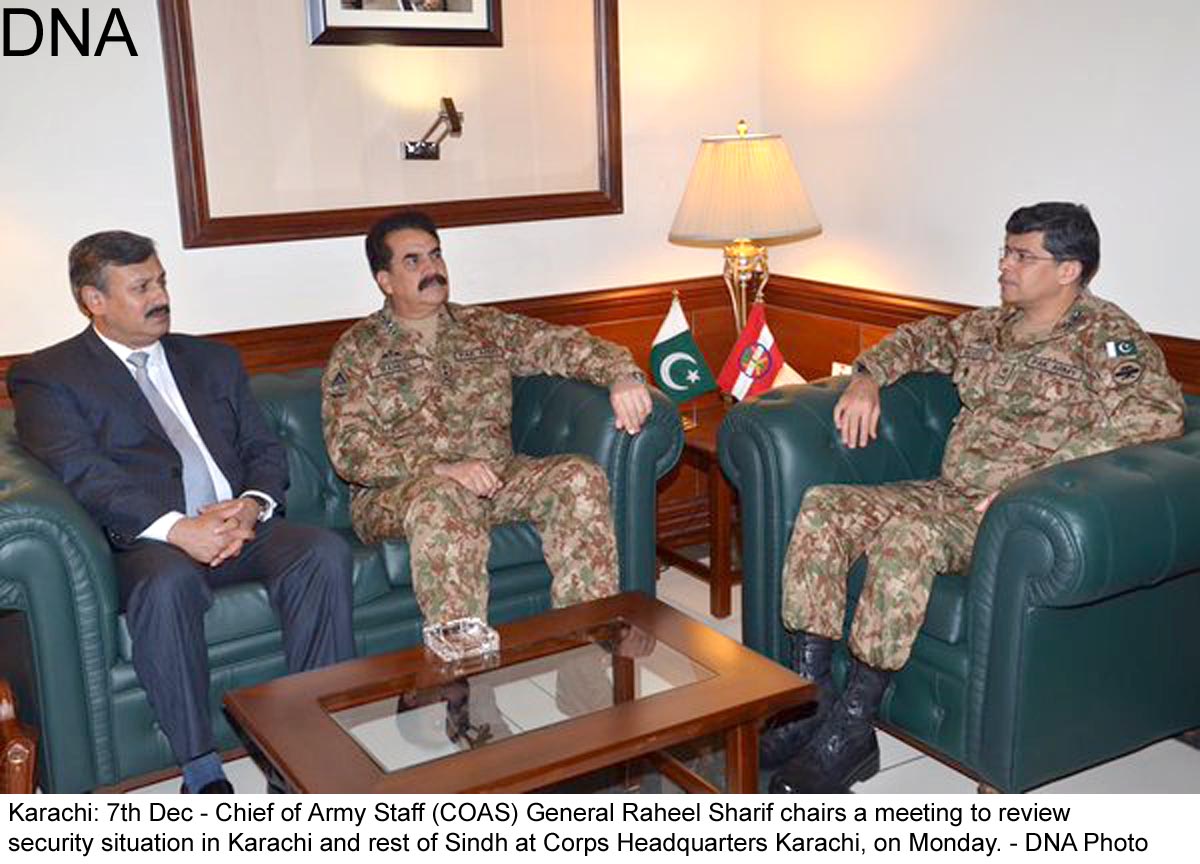 KARACHI: The Army chief chaired a meeting at the headquarters of V Corps to review the security situation, Sunday.
The meeting was attended by Corps Commander Karachi, Director-General (DG) Inter-Services Intelligence Lieutenant General Rizwan Akhtar and the DG Rangers.
The army chief lauded the Rangers, intelligence agencies and other law enforcement agencies for “noticeable improvement” in the security situation in Karachi through ongoing operations and the peaceful conduct during local government elections held in the metropolis on Saturday.
According to earlier reports, it appears that there are differences between the federal and Sindh governments over extending the paramilitary forces’ mandate.
On Sunday, Nisar expressed regret that Sindh had not made a decision on the issue of extending the Rangers’ deployment over the past two weeks.
“They should have done it by Saturday,” he had remarked, insisting that Rangers could not be left in the province without legal cover and would be pulled out if no extension was given. The decision, he noted, ultimately lay with the provincial government.
PPP spokesperson Senator Farhatullah Babar earlier told media that no decision would be taken on Rangers’ continued deployment in the province unless it was approved by the Sindh government.
“The responsibility and the power to extend the mandate of Rangers rests with the provincial government,” he said.
The PPP has been complaining about Rangers’ activities, especially after they acted against alleged irregularities and corruption in the land department of the provincial government.
Talking to media, MQM leader Farooq Sattar earlier said that although his party had not opposed the operation against terrorism and extremism, it had some reservations over cases where Rangers had acted against their mandate.
He said a meeting of senior MQM leaders would also be held on Monday to review the situation against the backdrop of the proposed extension of Rangers’ deployment.
Sattar was of the view that the governments at the centre and in Sindh should take all stakeholders on board so that a unanimous decision could be taken.
Rumours that the PPP was unwilling to give the Rangers an extension in Karachi have been doing the rounds since the party began delaying a decision on the matter.
Sources in the Sindh government say that while the provincial government may agree to extend Rangers’ deployment in Karachi, it would definitely ask the federal government to revisit their mandate.
The federal government gave special powers to Rangers in Karachi in June 2015, under the Anti-Terrorism Act, to arrest anyone found involved in violence.
The arrest of PPP leader Dr Asim Hussain for his alleged role in terror financing is one of the most high-profile examples of Rangers exercising their special powers.
The Rangers are currently leading an operation against criminal elements in Karachi which completed two years in September this year.
The ‘operation’ against criminal elements in Pakistan’s commercial hub was initiated back in September 2013 after the federal cabinet empowered Rangers to lead a targeted advance with the support of police against criminals already identified by federal military and civilian agencies for their alleged involvement in targeted killings, kidnappings for ransom, extortion and terrorism in Karachi.
A high-level apex committee meeting chaired by the Chief of Army Staff Gen Raheel Sharif on May 14, 2015 decided to implement effective policing and surveillance in the “vast suburbs of Karachi”, to prevent what the military spokesperson said were “sneaking terrorist attacks”.
The second phase of the Karachi operation was launched in early November. Rangers said terrorists, contract killers and their facilitators involved in attacks on LEA personnel “especially police, lawyers and witnesses” would be arrested during this phase, and that such elements would be eliminated.
Police sources have said that three elements — a political party, banned sectarian outfits and hired assassins — were responsible for the recent killings of the law-enforcers in the metropolis.
They also said that policemen were being targeted to undermine the perceived effectiveness of the Karachi operation since the number of targeted killings had dropped to one or two from 8-10 per day.
In late November, Interior Minister Chaudhry Nisar Ali Khan hinted that the security forces’ operation against criminals in Karachi would be expedited and pursued till its logical conclusion.