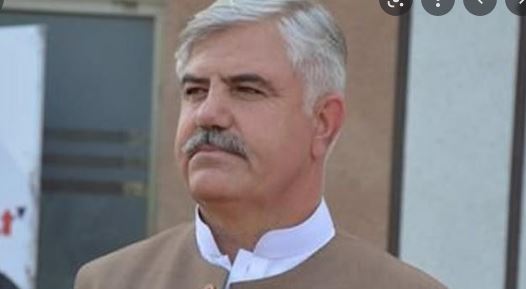 PESHAWAR, MAY 16 /DNA/ – Chief Minister Khyber Pakhtunkhwa Mahmood Khan on Monday formally Inaugurated newly established Clinical Skills Lab at Post Graduate Medical Institute (PGMI), Hayatabad Medical Complex Peshawar. This state of the Art Skills Lab has been completed at a cost of Rs. 370 Million which is the only public sector simulation center of its kind across the Country. The Lab has the latest and updated simulators and equipment for training of Doctors in all specialties including Medicine, Surgery, Gynae and Orthopedics etc due to which our Doctors will not have to go abroad for training as before, as state of the art training facilities are now available through this lab.  A ceremony to this connection was held here at PGMI, Hayatabad Medical Complex with Chief Minister Khyber Pakhtunkhwa Mahmood Khan as a chief guest. Provincial Cabinet Members Taimur Saleem Jhagra, Kamran Bangash, Barister Muhammad Ali Saif, members of Provincial Assembly Asif Khan, Malik Wajid and Arbab Wasim also attended the ceremony. Addressing the ceremony, the chief minister felicitated and lauded the efforts of Provincial Health Minister and management of PGMI for establishing state of the art Skills Lab and said this Skills Lab would prove to be a mile stone towards providing international standard healthcare facilities to the people of the Province. He added that PGMI was undoubtedly the best Institute imparting training in Medical Sector which now has become the first ever Public Sector Institute having the latest and state of the art Skills Lab in the country. Mahmood khan said that the Provincial Government has introduced unprecedented reforms in health sector adding that it has been the priority of his Government since the day first to put health and education sectors on modern lines. He said that old health care facilities in the Province were being upgraded whereas on the other hand new institutions with innovative facilities were being also established which would certainly result in improved health care facilities. He said that revamping of all District Head Quarter Hospitals was in progress adding that basic Health Units and Rural Health Centers were also being converted into 24/7 Health facilities. Besides Government was also establishing four tertiary Hospitals in the different regions of the Province under Public Private Partnership which on completion would reduce the burden of patients on existing major Hospitals of the Province and provide standard Health Care facilities to people at their door steps. He made it clear that a number of reforms and Development initiatives were completed during the last one and half year which have resulted in significant change in Health Sector of the Province. he said that Sehat Card Plus was a pro poor initiative of his Government under which free Health Care facilities had been extended to the cent percent Population of the Province. He lamented that imported Prime Minister even did not know that people of Khyber Pakhtunkhwa had already been provided with free treatment facilities. Mahmood Khan said that imported Government was not even able to decide Petrol Prices; what other decisions will it make. He said that Imran Khan was fighting for the real independence and sovereignty of the country adding that millions of people would take to the streets on the call of Imran khan for the purpose. He said that general elections would take place soon in the country and Imran Khan will become the prime minister again with a two thirds majority. Touching upon the rights of the Province, Mahmood Khan said that he will continue to fight to get rights of the Province from imported federal government at all cost. Earlier, Provincial Health Minister Taimur Saleem Jaghra also addressed the ceremony and highlighted the reforms and other initiatives taken in the Health Sector. Chief Executive officer of PGMI Dr. Muhammad Arif briefed the participants about the performance of institute. Medical Director Professor Dr. Shehzad Akbar and Hospital Director Dr. Shehzad Faisal of Hayatabad Medical Complex were also present on the occasion.