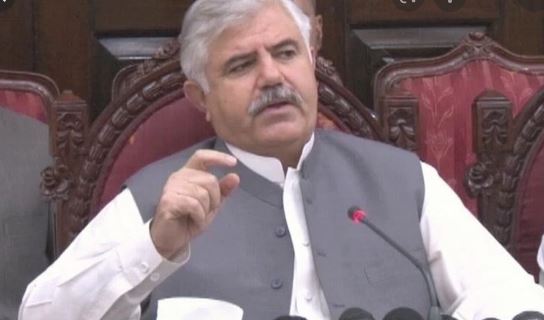 From Our Correspondent
PESHAWAR, JUN 13 /DNA/ – Chief Minister Khyber Pakhtunkhwa Mahmood Khan has termed the provincial budget for financial year 2022-23 as a pro-poor and a historic budget and said that this was the largest ever budget in the history of Khyber Pakhtunkhwa with an outlay of Rs. 1332 billion adding that all the sectors have been fully focused in the budget which on implementation, would bring about a new era of development in the province and bring visible positive change in the lives of the masses. “Despite the difficult financial situation, the provincial government did not compromise on the developmental portfolio, and Rs. 418 billion have been allocated for the developmental projects,” he said and added that special focus has been given to the ongoing developmental projects of public welfare so as to complete these projects well in time to facilitate the people without any delay.In a statement issued here regarding the budget for the financial year 2022-23, the chief minister said that all possible efforts had been made to provide significant relief to the common man in the budget adding that over 63 thousand employees were being regularized in this budget including 58000 teachers, around 700 doctors and project employees of other departments. Besides a total of 31% increase has been made in the salaries of government employees including 15% Disparity Reduction Allowance (DRA) given in the march this year. Similarly, 15% increase has also been made in the pension of retired government employees. He said that Rs. 26 billion had been allocated for Insaf Food Card program in order to give relief to the vulnerable segments of the society. The chief minister said that social sector has been the top most priority of PTI government from the very first day adding that budget of education, health and other social sectors has also been increased in the new year budget. He termed the Sehat Card Plus Scheme a flagship and pro-poor project of the provincial government and said that various new initiatives have been proposed to make it more comprehensive adding that free treatment of Bone marrow transplant, thalassemia and other diseases was being included in the scheme. Similarly, he stated that tax rate in Khyber Pakhtunkhwa which was reduced in current budget will also be maintained in the new fiscal year, whereas more than Rs. 25 billion would be spent on providing loans to small scale industrialists and youth. He felicitated the Provincial Finance Minister Taimur Saleem Jhagra, Chief Secretary Dr. Shahzad Bangash, Additional Chief Secretary Shahab Ali Shah and their team for presenting a balanced budget despite difficult financial situation.