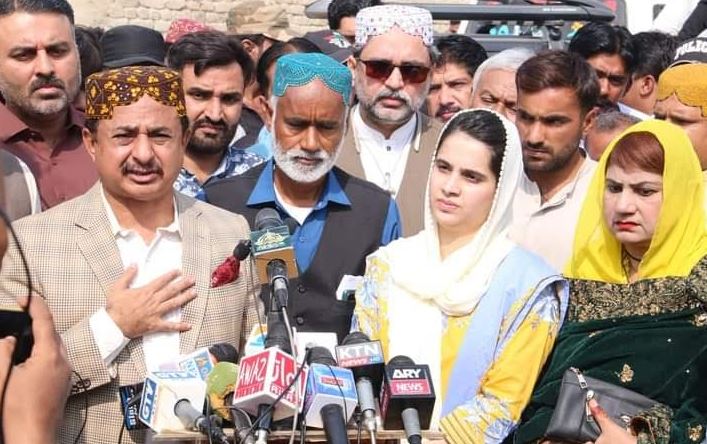 KARACHI: The chairman of the senate Sadiq Sanjrani has taken notice of the brutal killing of women by PPP MPAs father and guards in Sindh and called for a report on the incident. This he told by the senator Ejaz Ahmad Chaudhry.

He said that it is the embarrassing incident that took place in Qambar Shahdadkot is a slap in the face of the rulers of Sindh. PPP Sindh Assembly member Hasnain Isran’s father has put an end to bullying and lawlessness in the history.

Chaudhry further said that PPP’s brutal gang targets unarmed women and innocent family were being killed in broad daylight in Sindh. The tyrant rulers of Sindh have failed miserably in protecting the lives and property of the people he said.

Earlier, The Central Vice President PTI and Leader of the Opposition in Sindh Assembly, Haleem Adil Sheikh, arrived at village Khairpur Juso near Larkana on Monday and condolence the family victims.

Opposition Leader along with PTI leader Dr Masroor Ali Siyal and others offered condolence to family members of Fahmida Sial.

Haleem Adil Sheikh expressed deep sorrow and profound grief over murder of the innocent woman and assured support to the bereaved family.

Haleem Adil Sheikh, speaking to media at the occasion, said that he came to offer condolence of Fahmida Sial who was murdered inside her home by Sahaheed Hussain Isran, father of a PPP MPA Ganhwer Khan Isran in presence of local police.

Haleem said that he has been there in the village of Larkana on directives of Prime minister Imran Khan and Governor Sindh Imran Ismail to console the affected family and to assure them that no stone would be left upturned for dispensation of justice to the bereaved family.

He said that the poor woman carrying holy Quran was begging for mercy but cruel assassin and his henchman opened fire, Haleem said adding that police guards and vehicles of the MPA Isran were accompanied with Shaheed Isran.

Haleem Adil Sheikh said that Isran family wanted to usurp houses and land of poor Sial family so first they abducted male members of Sial family through police and then ambushed their home and killed Fahmida Sial while sanctity of the Holy Quran was also violated.

A nephew of murdered woman was also abducted because he was recording a video of the inhuman incident, Haleem said.

He said that Police was involved in the heinous crime and it was evident from the fact that anti-terrorism provisions were not included in FIR. It was a barbaric example of terrorism like Nizam Jokhio case, he maintained.

Haleem vowed to fight the case of Fahmida Sial for dispensation of justice to affected family.

He referred to case of Ume Rubab Chandio who set an example of tireless struggle against Sardari system and urged the Sial family to stand firm against intimidation and coercion of the cruel sardars and do not accept any Jirga.

Ume Rubab Chandio speaking at the occasion said that feudal system has ransacked Sindh and daughters of Sindh were seeking justice.

PTI leader Dr Masroor Sial said that affected family was being pressurized to withdraw from their case while local police could not provide security to the family.