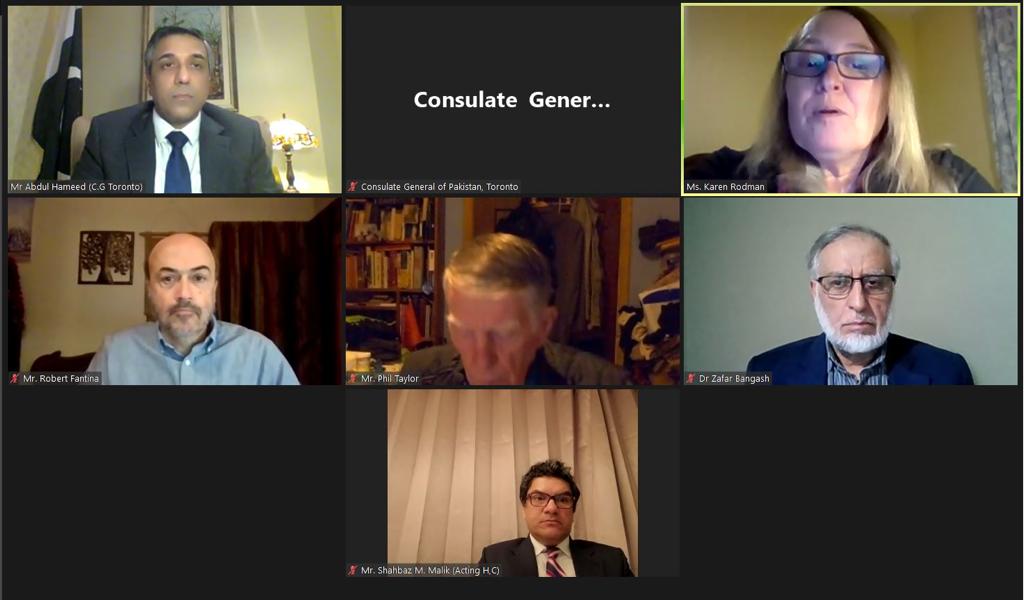 OTTAWA: Speakers at a webinar hosted in the Canadian city of Toronto have called upon the world to respect the right of self-determination and democracy granted by the UN to the people of Kashmir, saying *“nothing can stop an idea whose time has come, and for the idea of self-determination and democracy for the people of Kashmir, the time has come”*.

They noted that only with mutual respect, peace could be achieved in Kashmir. They said it was high time that the right to self-determination of the people of Kashmir was respected and granted to them as per the UN resolutions.

*The event was hosted by Consul General of Pakistan Toronto Abdul Hameed who apprised the participants of the background to the Right to Self-Determination Day, the resolution of 5th January 1949 adopted by the UN Commission on India and Pakistan (UNCIP) to settle the future of Kashmir through a free and impartial plebiscite under the auspices of the United Nations, and the grave human rights violations carried out subsequently by the Indian occupation forces in the Illegally Occupied Indian Jammu and Kashmir.*

Speaking to the webinar, *Karen Rodman, a noted Canadian human rights activist and director of Canadian think-tank Just Peace Advocates*, chronicled the history of the Kashmir issue and the earlier efforts of the United Nations to resolve this issue, and how these efforts had fallen apart in the face of Indian stubbornness over the last seven decades. She stressed that Kashmir was an internationally recognized disputed territory, however, in violation of the UN resolutions and the Geneva Convention, the Indian government had introduced draconian laws to silence the Kashmiris and deprive them of their rights and land.

In his address, *Canadian author and journalist Robert Fantina* read out various clauses of the United Nations Security Council Resolution 47, adopted on 21 April 1948, and explained in detail how India had violated all the clauses of this resolution one by one to deny the people of Kashmir their right to self-determination. India had imposed a rule of tyranny and oppression that had resulted in untold misery for the defenceless people of Kashmir, he said.

Well-known *Canadian broadcaster Phil Taylor* called the situation in Kashmir most unfortunate, saying the people of Kashmir had been forced to suffer under the yoke of 900,000 Indian troops despite the UN resolution granting them the right to self-determination. He argued that India could not shy away from granting the Kashmirs what it itself had pledged. He said Kashmir dispute could not be chased away by Indian troops as well, and the issue would only be resolved by granting the Kashmiris their freedom and right to self-determination.

*Dr. Zafar Bangash, director of Institute of Contemporary Islamic Thought and member of Friends of Kashmir Canada*, also addressed the webinar and stressed the need for joint global efforts to end oppression and subjugation of the people of Kashmir.

Earlier, *Acting High Commissioner for Pakistan to Canada Mr. Shahbaz Malik* read out the messages of the President and the Prime Minister of Pakistan in connection with the Self-Determination Day for the Kashmiris.