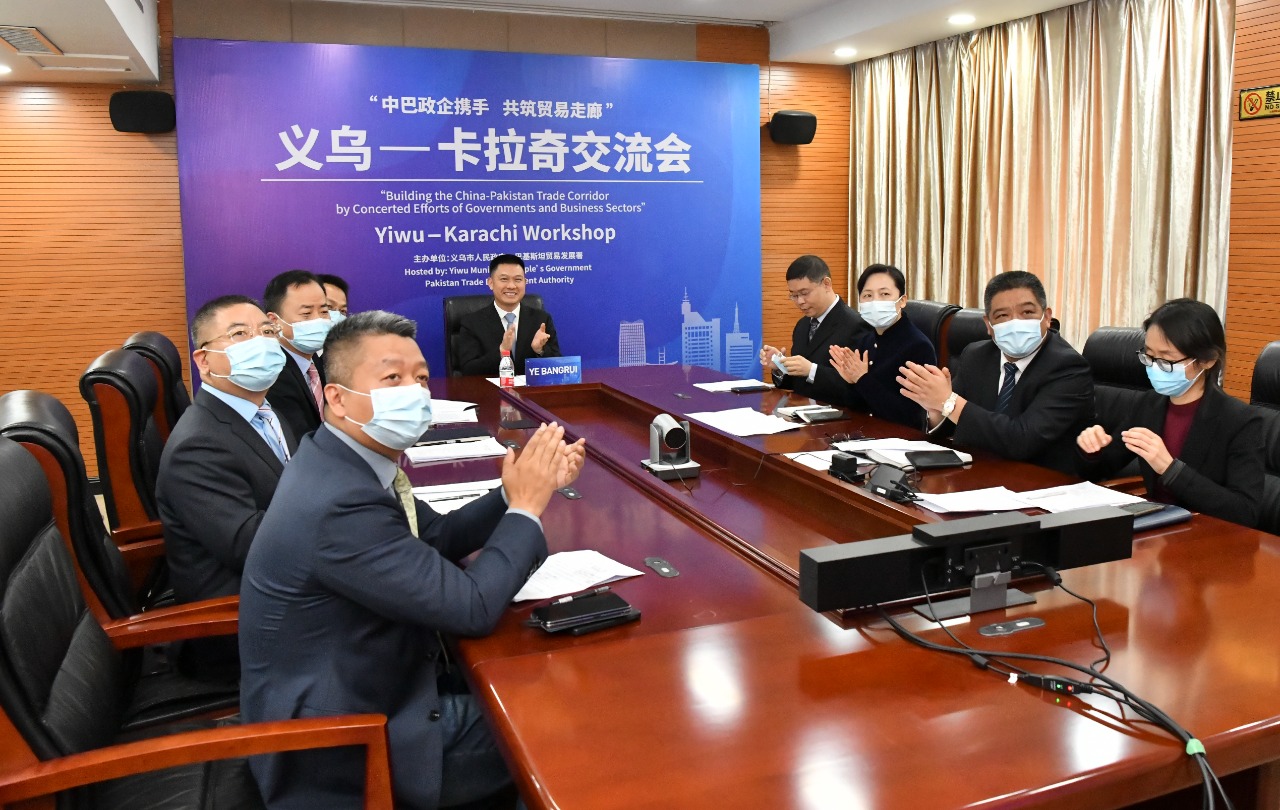 KARACHI: Yiwu-Karachi Workshop themed “Building the China-Pakistan Trade Corridor by Concerted Efforts of Governments and Business Sectors” was successfully held via video link. This event was jointly organized by Yiwu Municipal People’s Government and the Trade Development Authority of Pakistan(TDAP), and co-hosted by Foreign Affairs Office of Yiwu Municipal People’s Government and Yiwu Bureau of Commerce.

Representatives from the governments, chambers of commerce and enterprises of both sides joined the meeting and conducted in-depth exchanges. Mr. Li Bijian, Consul General of China in Karachi, said that there are close economic ties and huge development potential between Yiwu and Karachi.

He hoped to further enhance mutual trade exchanges, promote trade balance, improve trade quality, and introduce more high-quality Pakistani products to enter China through Yiwu market. Meanwhile, bilateral investment needs to be increased, and Chinese enterprises are welcome to make the best use of Pakistan’s favorable policies to invest in Pakistan and create more employment opportunities for the younger generation of Pakistan.

He also proposed that the trade representatives of the two sides would deepen policy communication, strengthen exchanges and cooperation, and jointly cope with the opportunities and challenges in the post-covid era. Mr. Hussain Haider, Consul General of Pakistan in Shanghai, said, Yiwu-Karachi Workshop is a manifestation of the commitment of the two countries, particularly the two cities, to shore up their bilateral trade and investment relations. He was confident that the Karachi-based businesses would enter into mutually beneficial cooperative relations with their Yiwu counterparts to give a further momentum to the bilateral economic relations.

He also assured that Pakistan’s Consulate General in Shanghai would give full support and facilitation to these endeavors. Mr.Ye Bangrui, Mayor of Yiwu City, gave a brief introduction of the social and economic development of Yiwu. He said, Pakistan is an important trading partner of Yiwu. In 2021, the trade volume between Yiwu and Pakistan reached nearly 600 million US dollars. The imports from Pakistan to Yiwu has tripled. He also mentioned, Karachi is Pakistan’s economic center, important port and largest city.

Yiwu looks forward to further enhancing exchanges and cooperation with Pakistan, especially with Karachi, to strengthening cooperation in export and import, e-commerce,exhibition and deepening cultural exchanges so as to achieve win-win development and contribute to the development of China-Pakistan economic and trade relations. Mr. Arif Ahmed Khan, Chief Executive of TDAP said, Pakistan and China have great potential for cooperation.

« Police say 6 dead, at least 9 injured in Sacramento shooting (Previous News)
(Next News) Construction of highways: How can quality of work be ensured? »