Bilawal’s long march will be welcomed in Rawalpindi: Fawad 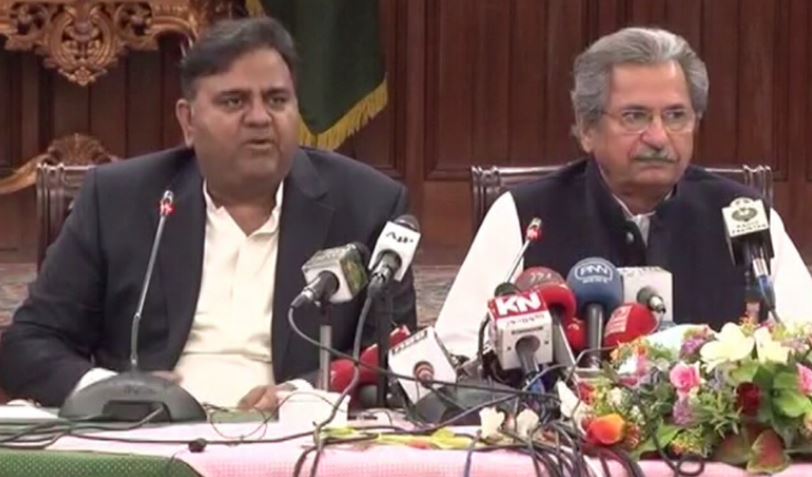 ISLAMABAD, MAR 5: Information Minister Fawad Chaudhry on Saturday said PPP Chairman Bilawal Bhutto-Zardari and his long march to the federal capital would be welcomed and served refreshments in Rawalpindi but it would be better if it arrived after the ongoing Test match between Pakistan and Australia which is being played at the Rawalpindi Cricket Stadium.

The PPP’s long march is underway and is poised to reach Islamabad on March 8. Meanwhile, the Australian cricket team is also in the country for a historic tour and the first Test match is scheduled to continue till Mar 8 as well.

Addressing a press conference in Lahore with Education Minister Shafqat Mahmood, Chaudhry said: “We will welcome Bilawal Bhutto’s long march in Rawalpindi. We only want that he reaches after the match [with Australia] since [Australian] cricket has arrived in Pakistan after 24 years and we don’t want to give a signa that [negatively] affects cricket in Pakistan.”

Taking a gibe at the opposition party, he said even if the PPP march managed to come to Rawalpindi during the Test match, “a cabin would suffice for the few people” with Bilawal and refreshments would be served to the “60 to 100 people with you”.

The information minister also quipped that Jamiat Ulema-i-Islam-Fazl (JUI-F) chief Maulana Fazlur Rehman was looking dejected after his announced 48-hour period had lapsed without any advancement on the planned no-confidence motion against the government.

“I think the no-confidence [motion] is a child of theirs [joint opposition’s] who has been lost in the streets somewhere. So let’s see now how much time they take in searching for that child.”

Chaudhry said the government was standing strong under the prime minister’s leadership and its allies had reassured it of their support.

Meanwhile, the education minister hit out at PPP co-chairperson Asif Ali Zardari and PML-N President Shehbaz Sharif, alleging they had set up a “horse-trading market” and were justifying it instead of feeling ashamed about it.

He also said there were rumours in the media that foreign forces were behind the unity in the opposition ranks and said it was a condemnable development if true since foreign powers should have no involvement in the country’s internal affairs.