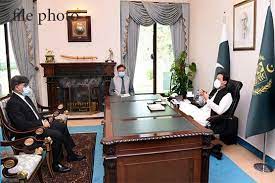 According to details, the attorney general left for Prime Minister Office after Supreme Court of Pakistan summoned Imran Khan in APS attack case.

Khalid Javed briefed the premier about developments in the case.

During the proceedings, the CJP asked Attorney General whether he had forwarded the court order to the premier over which, the attorney general said that the order was not dispatched to the PM.