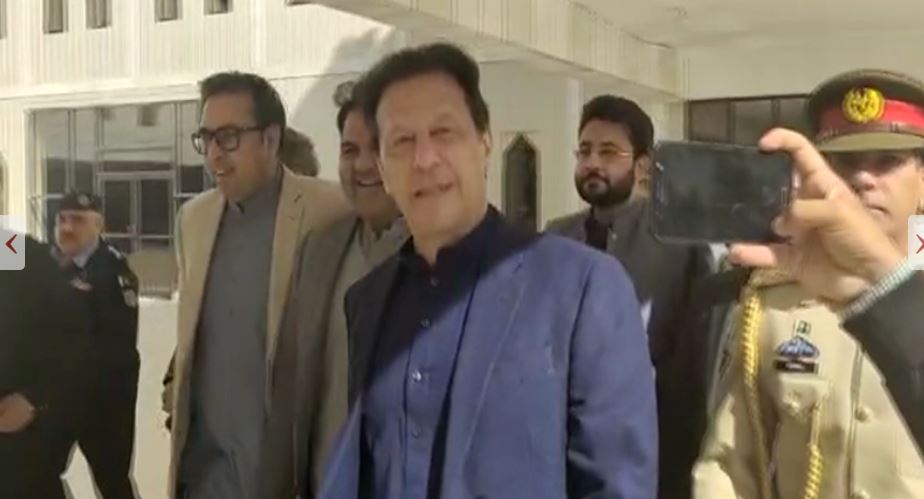 ISLAMABAD, NOV 10: The Supreme Court on Wednesday grilled Prime Minister Imran Khan over the government’s inaction against those responsible for the Army Public School (APS) attack in 2014 and the ongoing talks with the Tehreek-i-Taliban Pakistan (TTP).

A three-judge bench — headed by Chief Justice of Pakistan (CJP) Gulzar Ahmed, and comprising Justice Qazi Mohammad Amin Ahmed and Justice Ijazul Ahsan — summoned the prime minister in connection with the case around 10am. He arrived at the court roughly two hours later, just before noon.

A total of 147 people, 132 of them children, were martyred when TTP militants stormed the APS-Warsak School, in Peshawar, in 2014. The government is in talks with the TTP over a “reconciliation process”, with Information Minister Fawad Chaudhry having announced on Monday that a “complete ceasefire” had been reached with the banned outfit.

During the hearing, Justice Amin reminded the premier that Pakistan is not a small country. “We have the sixth largest army in the world,” he said.

With regards to media reports regarding negotiations with the TTP, Justice Amin questioned whether “we are bringing them [TTP] back to the negotiating table instead of taking action against them?”

“Are we going to surrender once again?” Justice Amin asked the premier.

As the three-member bench continued to grill the premier, at one point the latter asked for a chance to speak, given that he had been summoned for the hearing.

But the judges continued to fire questions at him.

CJP Gulzar said, “You are in power. The government is also yours. What did you do? You brought those guilty to the negotiating table.”

“The satisfaction of the parents [who lost their children in the APS attack] is necessary,” said Justice Ahsan addressing the premier.

A day earlier, the information minister said that the government will give a chance to those factions of the TTP that are not directly involved in terrorism and are ready to honour Pakistan’s Constitution and law, whereas the hardcore TTP terrorists involved in the killing of innocent people and still wanting to continue their nefarious activities will be dealt with an iron hand.

The decision was taken at a meeting of the federal cabinet presided over by Prime Minister Imran on Tuesday.

Speaking at a post-cabinet meeting press conference, Chaudhry said: “If all of them or some of them or part of them want to come back and express their allegiance to the Constitution of Pakistan and undertake to respect the law of the country, obviously, we will give them a chance.”

During the hearing today, the bench asked the federal government to listen to the stance of the victims’ parents, saying action should be taken against anyone whose negligence was proven.

The apex court directed the government to submit its report within two weeks, but AG Khan requested the court to grant additional time. Accepting the plea, the court granted four weeks to the government.

The court inquired from Prime Minister Imran what action had been taken in the case.

Chief Justice Gulzar then picked up the Constitution book and said it guaranteed security to every citizen.

He noted that Pakistan had lost 80,000 lives to terrorism, while the National Action Plan was drafted after the APS attack. “The people were in deep trauma, they were standing behind the army in the war against terrorism.”

Imran said Pakistan would have to contend with security issues until the Afghanistan situation settled down.

He said since the Taliban took over power in Afghanistan in August, elements from the militant Islamic State group, TTP and Baloch separatists had arrived in Pakistan. Such elements had also gone underground during the Afghanistan evacuation via Pakistan, he added.

“All of our security agencies are taking steps to deal with the possible threats,” the premier told the court.

Prime Minister Imran said the APS attack had been “very painful”. “Our party was in power in Khyber Pakhtunkhwa when the attack took place in 2014. On the night of the tragedy, we called a meeting of our party,” he added.

He further said there were no “holy cows” among the names provided by the parents of the APS attack victims, seeking action against them. “You issue orders and we will take action,” he told the bench.

“I want to make it clear that we have done whatever compensation we could have.”

At this, the chief justice remarked that the parents wanted their children, not compensation.

Justice Ahsan then informed the prime minister that the victims’ parents desired that action be taken against the officials in high-level positions at the time of the attack.