All orders and actions initiated by PM, president subject to court order: SC 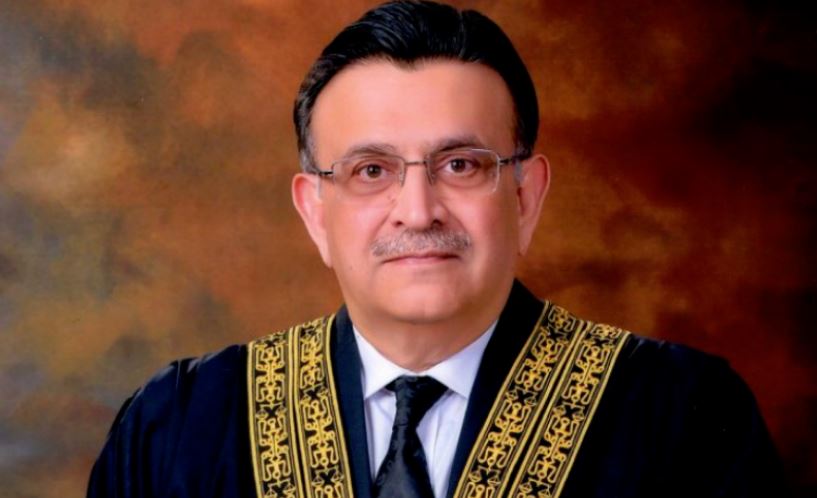 ISLAMABAD, APR 3: Chief Justice of Pakistan Umar Ata Bandial on Sunday said that all orders and actions initiated by the prime minister and president regarding the dissolution of the National Assembly will be subject to the court’s order.

The chief justice made the observation after taking notice of the current situation in the country following the dismissal of a no-confidence motion against Prime Minister Imran Khan by National Assembly (NA) Deputy Speaker Qasim Suri and the subsequent dissolution of the NA by President Arif Alvi, the spokesperson of the apex court said on Sunday.

The chief justice said the law and order situation in the country should not deteriorate, instructing all political parties to act responsibly.

The chief justice said that no unconstitutional step should be taken by any state institution and that no one should try to take advantage of the situation. “Public order should be maintained,” the CJP said.

He said the court did not want to drag the hearing on account of Ramazan and that notices should be issued to all the political parties. Justice Bandial also ordered the interior and defence secretaries to brief the court on the law and order situation.

Justice Bandial remarked that President Alvi should be made a respondent in the case since it was an “important matter”. He also ordered that the Supreme Court Bar Association and all political parties be made respondents in the suo motu notice.

The weeks-long political turmoil in the country reached its climax today as the NA deputy speaker prorogued a much-awaited sitting of the lower house of parliament without allowing voting on a no-trust motion against PM Imran.

Suri, who was chairing the session, dismissed the motion in a shock move, terming it against Article 5 of the Constitution, which states that “loyalty to the State is the basic duty of every citizen”.

At the outset of the session, Pakistan Tehreek-i-Insaf’s (PTI’s) Fawad Chaudhry took the floor and referred to the clause, reiterating the premier’s earlier claims that a foreign conspiracy was behind the move to oust the government.

“On March 7, our official ambassador was invited to a meeting attended by the representatives of other countries. The meeting was told that a motion against PM Imran was being presented,” he said, noting that this occurred a day before the opposition formally filed the no-trust move.

“We were told that relations with Pakistan were dependent on the success of the no-confidence motion. We were told that if the motion fails, then Pakistan’s path would be very difficult. This is an operation for a regime change by a foreign government,” he alleged.

The minister questioned how this could be allowed and called on the deputy speaker to decide the constitutionality of the no-trust move.

At that, Suri noted that the motion was presented on March 8 and should be according to the law and the Constitution. “No foreign power shall be allowed to topple an elected government through a conspiracy,” he said, adding that the points raised by the minister were “valid”.

He dismissed the motion, ruling that it was “contradictory” to the law, the Constitution and the rules.

Angered by the NA proceedings, opposition parties decided to hold their own meeting in the lower house of parliament with PML-N’s Ayaz Sadiq sitting on the speaker’s seat.

They conducted their own proceedings with 195 lawmakers voting in favour of the no-confidence motion, according to PPP’s Sherry Rehman.

Subsequently, in another shock move, PM Imran, in an address to the nation, said he had advised the president to “dissolve assemblies”.

He also congratulated the nation for the no-trust motion being dismissed, saying the deputy speaker had “rejected the attempt of changing the regime [and] the foreign conspiracy”.

The premier further said he had written to the president with advice to dissolve the assemblies, adding that the democrats should go to the public and elections should be held so the people could decide who they wanted in power.

“Prepare for elections. No corrupt forces will decide what the future of the country will be. When the assemblies will be dissolved, the procedure for the next elections and the caretaker government will begin,” he added.

President Alvi then dissolved the NA on PM Imran’s advice under Article 58 of the Constitution.

Fawad Chaudhry confirmed the development in a tweet, adding that the cabinet, too, had been dissolved while PM Imran would continue in office under Article 224 of the Constitution, which is related to elections and by-elections.

These developments unfolded as opposition leaders lambasted the government for what they called a blatant violation of the Constitution and urged the SC to take notice of the situation and intervene.

Later, Fawad Chaudhry spoke to the media outside the SC and asserted that parliament was a separate institution and today’s NA ruling couldn’t be challenged in any court.

“Political decisions shouldn’t be taken to courtrooms. I feel the processes have now moved forward,” he said.

Chaudhry revealed that the president had dissolved the NA on the prime minister’s advice and within 90 days elections would be held.

Within two to three days, he said, a letter would be sent to “former leader of Opposition Shehbaz Sharif”, seeking “their names for the interim government”.

Responding to a question, he added that the army had no relevance with the current situation. “This matter relates to parliament,” he said.