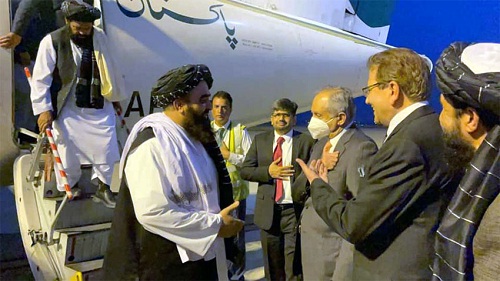 Islamabad : An Afghan delegation led by Acting Foreign Minister Amir Khan Muttaqi is in Islamabad to discuss ways to facilitate transit trade, cross-border movement and support for the people of Afghanistan.

The Afghan Acting Foreign Minister will also participate in a meeting of the Troika Plus on Afghanistan today (Thursday).

The important meeting will be attended by Special Representatives from China, Russian Federation, the United States and Pakistan.

The Foreign Minister Shah Mahmood Qureshi will inaugurate the meeting which will discuss the situation in Afghanistan and the way forward.

The Foreign Office, in a statement, said Pakistan attaches high importance to the Troika Plus mechanism on the situation in Afghanistan.

It said Pakistan hopes that deliberations of the Troika Plus meeting would contribute to the ongoing efforts for achieving lasting peace and stability in Afghanistan.

Meanwhile, China has expressed full support to Pakistan’s efforts for peace and stability in Afghanistan and building world consensus for this purpose.