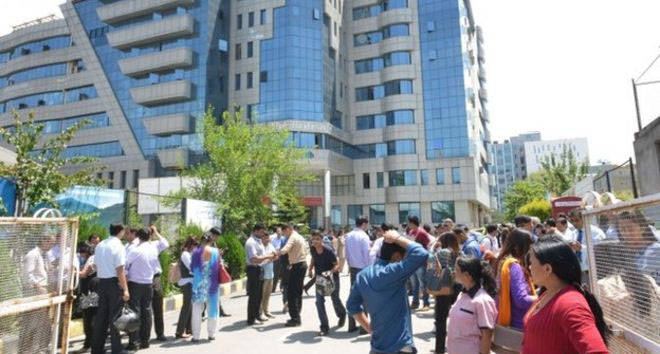 KATHMANDU, 12 MAY, (DNA) – A 7.3-magnitude earthquake struck devastated Nepal on Tuesday, sending terrified residents running into the streets in the capital Kathmandu, according to the US Geological Survey.
The quake struck at 12:35pm local time in the Himalayan nation some 76 kilometres east of Kathmandu, more than two weeks after a 7.8-magnitude quake which killed more than 8,000 people.
The latest quake hit at a depth of 15.0 kilometres, according to the USGS.It had earlier measured the quake at 7.4.
The tremors in Kathmandu lasted close to a minute according to an AFP correspondent in the city, with the ground swaying. Sirens could be heard soon afterwards although there were no immediate reports of casualties.
The quake was also felt some 1,000 kilometres away in the Indian capital New Delhi where buildings shook and office workers evacuated.
Other cities in northern India were also rocked by the quake, including Bihar where television footage showed residents gathering on the streets.
“This is a really big one,” said Prakash Shilpakar, the owner of a handicrafts shop in Kathmandu who was trying to call his parents in the town of Bhaktapur, devastated in the April 25 quake.
The quake’s epicentre was close to Everest Base Camp, which was evacuated after an avalanche triggered by the April 25 quake killed 18 climbers. Mountaineers seeking to scale the world’s tallest peak have called off this year’s Everest season. =DNA
==========

Virgin Atlantic doing quite well in Pakistan Liezl Gericke , the Head of the MiddleRead More